Is waste incineration sensible, a health disaster or a white elephant?

Amey have submitted a planning application for an Energy from Waste plant at their waste handling facility in Waterbeach [1]. Is this a good thing or a bad thing? There are potential concerns about air pollution, carbon emissions and disincentive to reycle. But it will divert stuff from landfill and probably reduce GHG emissions overall.

The facility will process residual waste – the stuff that has come through the Mechanical Biological Treatment and not been picked out as valuable, and the stuff that was rejected from the dry recycling plant, plus construction and demolition waste. This waste would normally go to landfill.

The waste will be burnt in a furnace at 850°C to produce electricity and also heat; they hope to supply district heating for new developments in the area. 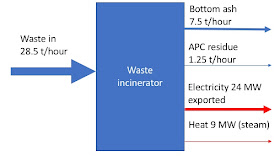 This means that the amount going to landfill is reduced from 28.5 tonnes to at most 1.25 tonnes.


Air pollution
The level of pollution from well-run EfW plants should be low. Public Health England says: While it is not possible to rule out adverse health effects from modern, well regulated municipal waste incinerators with complete certainty, any potential damage to the health of those living close by is likely to be very small, if detectable. This view is based on detailed assessments of the effects of air pollutants on health and on the fact that modern and well managed municipal waste incinerators make only a very small contribution to local concentrations of air pollutants[2].

Other organisations disagree. For example Zero Waste Europe has commissioned a report that finds that: the release of pollutants to air, soil and water is an unavoidable consequence of waste incineration, despite the adoption of pollution abatement measures [3]. Their report includes five case studies (selected as having problems), of which three are cement plants using waste as fuel (in Spain, Slovenia and Germany) that have breached limits on emissions – the one in Slovenia was also operating outside its permit. The two EfW cases are one in Scotland with major technical problems that lead to its licence being revoked and one in Paris where there are disputes as to the level of emissions from the plant.

There is a 38 degrees petition against the incinerator - this reports complaints from local residents of sore eyes and throats and dreadful smells from the site as it. But it is much easier to manage emissions from an incinerator than from a landfill site that has to be open to the air, so it seems likely the incinerator could improve conditions in this respect. They also say that waste incinerators are 'associated with' a wide range of health impacts including cancer and birth defects. They do not give references for this, although they do name the WHO as one source. However the WHO review I found (dated 2015) found the epidemiological evidence for harm from modern plants to be inconclusive. There was good evidence of harm in studies relating to older, dirtier plants [4].

Regulations are not always enforced, although in the Scottish plant case they were effective in closing the plant. However, some argue that air quality regulations are not tight enough anyway, even when they are implemented. The WHO guidelines are significantly tighter than EU rules.

Who to believe on this? Personally I have a lot of faith in Public Health England; they have shown themselves to be objective in similar matters such as health effects of particulates [5].

Carbon emissions
Amey say that half the energy from their plant will be classed as renewable because it comes from organic stuff (e.g. food waste, paper etc.). That means half won’t be renewable, presumably mainly plastic and rubber made from fossil fuel sources. This is like running a power station with half straw and half oil. The carbon emissions from the plastic are fossil fuel emissions. Perhaps at some point in the future we could fit carbon capture and storage equipment to these plants.

Disincentive to recycle
All waste producers, including anyone running a business and even householders, have a duty of care to ensure that waste is disposed of safely. Typically this means giving it to a licensed waste handler. An EfW plant counts as safe disposal. [6]

For the owners of the EfW site, their business model requires them to process a certain volume of waste, for the lifetime of the plant (in this case 40 years). If it looks like they aren’t going to get enough they will do what they can to beat the competition from other licensed waste handlers – including recycling/re-use.

Local authorities have targets for recycling and composting, and EfW does not count for this so they can’t just send everything to EfW, job done. However, the current target is only 50% recycling/composting (in the UK we are behind this target, at 44%).

So having an incinerator seems likely to reduce recycling rates – however this is not inevitable as demonstrated by Switzerland, the Netherlands, Austria, and Belgium all of which have rates greater than 50% and incinerate the remainder [7].


Half the energy is renewable
As I mentioned above, the plant will get half its energy from biomass. This is renewable energy and it will supply heat as well as electricity which makes it more efficient.

It diverts waste from landfill
The waste processed in EfW is stuff that would otherwise have gone to landfill. The chart below shows how it originates – mostly from mixed waste in our black bins and construction and demolition waste.


Putting waste into holes in the ground is not fundamentally sustainable because there is a limit to suitable sites with minimal risk of water contamination, suitably close to waste sources but away from people who would be disturbed by heavy vehicles, nasty smells etc.

It reduces GHG emissions
Any waste in landfill containing carbon that is not totally inert will ultimately degrade, generating methane - a very powerful greenhouse gas. This is why biomass is supposed to be stabilised before it goes into landfill; typically it undergoes an accelerated composting process. In this case stable is a relative term. I used to believe that plastic, at least, was inert in landfill but bugs are evolving to handle it in a variety of conditions, so this should not be assumed.

Landfill sites normally have methane collection systems in place for the first few decades while emissions are relatively rapid. They don’t catch everything and emissions don’t completely stop – just get slower.

Even though burning stuff in EfW generates carbon emissions, the methane emissions from the same material could be much worse, considering the long term.

Can we reduce the quantity of waste instead?
Alternatively we could produce less waste or recycle more – this reduces the problem though it does not go away entirely.

Doubtless some of the waste that Amey currently landfills could have been recycled or composted if it had been separated out at an earlier stage. That has not happened for whatever reason – quite often the problem starts in the home or even before that such as:


The problem of packaging that cannot be recycled is high on the agenda at the moment. The EU has set an ambitious target to make all packaging recyclable or reusable by 2030 – only 12 years away. In the UK, May has announced a rather less ambitious 25 year plan including eliminating ‘avoidable’ plastic waste. Also the UK is being obstructive on increasing recycling targets in the EU [9]. In any case, targets are one thing, achieving them is another.

My verdict
I am not convinced by the air pollution argument as I explained above. I believe EfW is preferable to landfill, even for plastics, because of the GHG emissions as well as the land use issue. If we can drastically reduce this waste in other ways within maybe 15 years, then an EfW plant would be a white elephant. I am hopeful on this, but I would find it hard to argue against someone who says I am being unrealistic.

Comments on this blog are moderated. Your comment will not appear until it has been reviewed.